Since 1994, Aryeh has been delighting audiences around the globe with his passionate, enduring and evocative music. Aryeh’s uncommon approach to the Celtic harp and folk harp repertoire, command of the unusual Swedish nyckelharpa (or keyed fiddle) and other stringed instruments, his recording and production credits, and his numerous critically and commercially successful albums have earned him credit as a musician, recording and performance artist of extraordinary talents and abilities:

Aryeh currently pursues a career as a full time freelance musician, performance and recording artist, record engineer and producer based between Corvallis and Eugene region of Oregon.

His notable performances include anywhere from playing in an intimate setting for Prince Charles and Lady Camilla Bowles Parker to extremely large audiences of 3400 in the outdoor amphitheater, Dalhalla in Rattvik, Sweden, to Sweden’s oldest and largest music festival, Musik Vid Siljan, to Harpcons 2000, 2005, Festival of Harps 2003, 2005 and 2006 and performing or teaching at numerous other stages, conferences, music camps and performance venues.

He has made numerous stage appearances with such major musical luminaries as Patrick Ball, Lisa Lynne, Barbara Higbie and Liz Story and many many more. His music has been featured on the internationally syndicated music program Echoes (PRI) as well as countless other radio stations throughout the world.

Aryeh specializes in performing in public settings and has been a featured performer and draw at countless festivals and fairs in California and concert venues throughout the country. 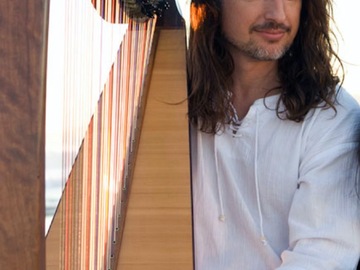 Our call was so helpful.

Lionharp music helped me identify my heirloom instrument and gave me a bunch of resources to start my journey with the wire strung harp.